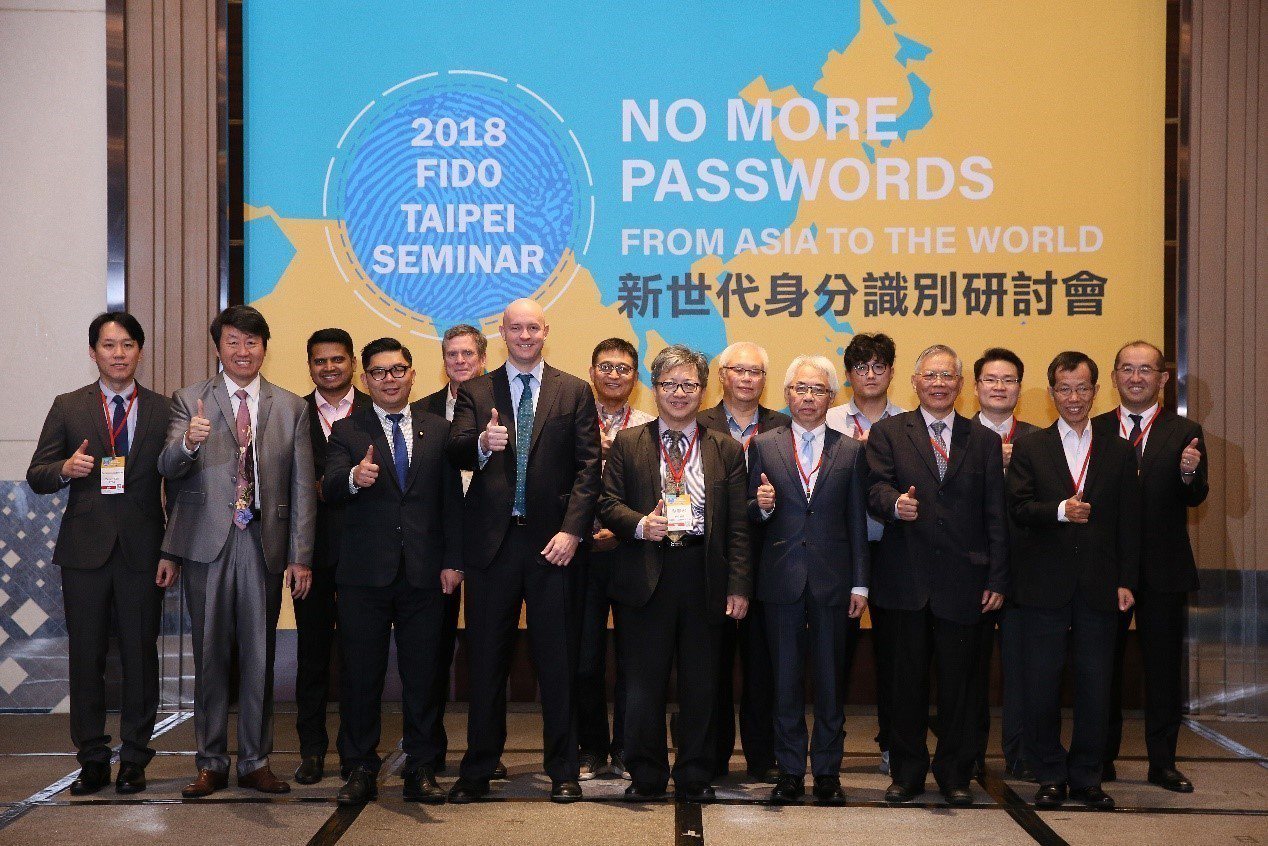 2018 FIDO Taipei Seminar, jointly organized by the FIDO (Fast Identity Online) Alliance and Egis Technology Inc., was held in Taipei on Nov. 30. Themed “No More Passwords”, the event brought together professionals from around the world to discuss updates and future trends in authentication and identification technologies with the aim of encouraging Taiwanese stakeholders and government departments to adopt the technologies in line with international standards. Adoption of such technologies opens the way to more business opportunities.

Todd said during his speech that as a board member of FIDO, Egis is committed to broadening Taiwan’s international presence via international partnerships and is glad to see increased interest on behalf of stakeholders and the government in authentication and identification applications. FIDO is an industry consortium whose mission is to provide alternatives to passwords in a move to increase network security, while helping companies and organizations cut deployment costs. FIDO wants to heighten interest among Taiwanese government departments and stakeholders in the technologies and facilitate their widespread adoption across the Taiwan via the seminar, in a bid to make Taiwan a better, more convenient and safer place to live.

Brett McDowell, Executive Director of FIDO Alliance, gave a brief presentation on the alliance and its operations. FIDO aims to develop specifications that define an open and interoperable set of mechanisms to supplant reliance on passwords in a way that securely authenticates users of online services via technologies such as biometric authentication and security modules. The 250+ member, cross-industry FIDO has received an enthusiastic response from leading international firms. Its two sets of specifications, U2F and UAF, have been widely deployed in China, Japan and South Korea. The alliance has also set up a win-win ecosystem with global partners. The FIDO2 Project continues to expand its reach, with international organizations such as W3C and ITU adopting its recommendations. Brett also shared encouraging news with attendees at the event: On November 28, ITU announced adoption of FIDO2 as part of its international specifications. The original FIDO had already been part of the specifications.

Sessions in the morning included FIDO2 case studies presented by Early Warning Service and Microsoft, followed by case studies in Taiwan presented by GoTrust, AuthenTrend, TWCA and Kiwi Technology. GoTrust assisted a Taiwanese bank in implementing the FIDO solution into its mobile app, leading to the number of transactions being handled through the app tripling while overall utilization doubled, thanks to the convenience and added security. AuthenTrend’s ATKey.Card, with a built-in USB, Bluetooth Low Energy (BLE), Near Field Communication (NFC) and single-fingerprint enabled authenticator, works for all devices including PCs and can be used as an employee ID badge and location tracker. Kiwi Technology uses FIDO authentication as a key management solution to increase the security of IoT applications.

To bring local attendees up to date on the latest global trends and FIDO’s widespread adoption across Asia, during the afternoon session, guests from South Korea, Japan, Thailand and India related the progress of FIDO in their respective countries.

Dongpyo Hong, Vice Chairman of FIDO Korea WG, said 31 South Korea-based firms have joined FIDO, making South Korea the leader in terms of the number of companies building FIDO certified products. Since 2013, FIDO specifications have been deployed in the financial, telecom and education sectors as well as in many firms and government departments. Leading Korea-based companies, among them Samsung Electronics, BC Card, SK Planet and KT, have enhanced their quality of service and user experience via deployment of FIDO standards. Looking forward, a FIDO standards-based integrated certification platform is on schedule to be built and expanded to IoT and blockchain applications.

Koichi Moriyama, Senior Director of Product Innovation in NTT DOCOMO and Chairman of FIDO Japan WG, gave a presentation on NTT DOCOMO’s FIDO Universal Authentication Framework (UAF). To help users who often forget their passwords, NTT DOCOMO advocates adoption of a FIDO UAF specification to deliver a password-less experience, where a user is able to use a form of biometric authentication on their local device, such as a fingerprint or an iris scan to securely log in. In addition to integrating FIDO UAF into its dmarket service. In 2015, NTT DOCOMO had taken the lead in launching UAF-certified devices and servers. He emphasized that FIDO is the best solution in terms of cost, usage, security and range of applications and that NTT DOCOMO plans to further expand FIDO UAF-certified products into all new Android devices.